As I have mentioned in my last couple posts I currently have A LOT OF FEELINGS. In order to avoid having them take complete control of my life, I have focused on running again and figuring out ways to motivate myself. So I signed up for a 10k that I was in no way ready for which meant I needed to get ready so I didn’t make a complete fool of myself!

When I began running, 10ks quickly became my favorite race length and the Sole of the City 10k was the first 10k I ever ran (back in 2014, I can’t believe it has been so long!). It was only natural that I gravitated towards that race to be my motivator. Yay for races with special significance!

What made this race even more special is that I ran it with my sister and a close friend and for both of them it was their first 10ks! Nice to know my master plan of infecting those around me with the running bug is working!!

We started off the day with some fun pictures before finally making our way over to the starting line.

It always amazes me how huge this race is! The announcer said there were 4600 racers running it this past Saturday. 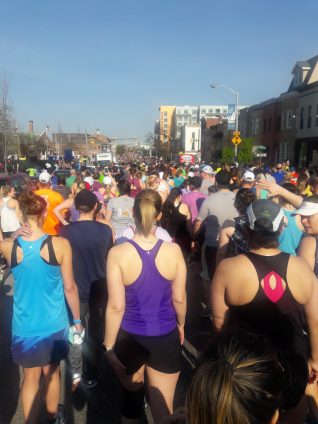 You guys that is A LOT of people!

I enjoy taking selfies in front of crowds of people!

The race started off great. For about the first two miles we all stuck together. With this being my first race in a while, I took the pace slow and then right before mile two I tripped and rolled my ankle, because of course I did.

So we stopped and walked until we got to the second mile marker by which point I realized it was a false alarm, my ankle already felt better, and I was ready to go running again. It’s been a week since the race, and there is no residual injury so I’m grateful that didn’t turn into something worse.

The weather on Saturday was beautiful, but HOT. We knew it was only going to get hotter and we made a point to stay hydrated throughout the day and not skip any of the three water stations along the route.

Around mile four is when we all split off, or rather lost each other and just kept running, because as I mentioned above there were A LOT OF PEOPLE!

You guys, I was so proud of myself with this race. Other than the brief stop at mile two I ran the entire first five miles without stopping. At mile six I hit a wall, and the heat was getting to me so that last mile was a combination of running and walking. Still I was shocked when I found out my time at the end. I finished at 1:18:56. That isn’t my fastest 10k by a long shot but I’m so proud of it considering I only gave myself about a month to go from no running to a 10k race.

Overall, the race was great and well planned, my only complaint that they ran out of water bottles at the finish line. That may have been due to how hot it was and people taking more than one. Luckily my sister and I always bring water to races so it didn’t remain a problem for too long!

Also side note, who are these mystery people who save their racing bibs? I always mean to and then at the end they look like the picture below, and the only place that’s going is in the trash.

Are you training for any races soon? Or have you run any recently? Are you one of those special unicorns who saves racing bibs? Tell me your secrets, how do you keep them looking not a mess?

It seems the weather is starting to warm up a little here in Maryland. Yesterday it was almost 60 degrees and today it is supposed to get up to 74 degrees.

I’m just hoping it stays this way, and we don’t get another freak snowfall in April….

After seeing the forecast yesterday morning I decided it was the perfect day to go running after work. I brought my running clothes to work, because otherwise I will lose all motivation the second I get home and realize lying on the couch all evening sounds much more comfortable than three miles…I can’t be the only one who deals with that struggle. Anyone?

Anyway, since this past Sunday I celebrated Orthodox Easter, that meant last week was Holy Week. I spent every night in church, and while I loved it, it also meant I didn’t get to go running at all next week.

Did I mention I have the Sole of the City 10k on Saturday….Yeah I haven’t been feeling very confident about that run as a result.

My run today was great, the weather was perfect for it! I left my Garmin at home, which was a disappointment but based on the mile markers on my route I managed to run about 3.5 miles. Two of those miles without stopping to walk!

Check out that view!

After my hiatus from running I’m still working back up to the endurance I had before, which means all my runs involve walking and rests. Although, those walks are getting shorter and shorter each time I go out.

Then it was back home for home made beef and broccoli with fried cauliflower rice while watching The Marvelous Mrs. Maisel.

Yumm….have I mentioned this is one of my favorite quick meals?

As long as you end the night with The Marvelous Mrs. Maisel on Amazon Prime and you’re doing life right.

Seriously though, have you watched this show? If you haven’t you NEED to. Best show that is out there right now. Do yourself a favor, ignore the awful title and watch it if you haven’t already.

Did you go running or exercise this week? How did it go?

Have you watched The Marvelous Mrs. Maisel, and are you as obsessed with it as I am?

Disclaimer: This post is going to be full of real talk.

It has been forever and a day since I last posted. Or, more accurately, almost two years. The initial reason? I was finishing my Master’s Degree. I had a capstone to work on, exams to study for, and to be quite honest, ensuring I was successful with all of that, while working full time, didn’t leave time for much else. But then I graduated!

Graduation gave a short break from stress, and then life decided I’d had enough relaxation and that was the perfect time to throw a ton of unexpected stressors my way that invited a whole slew of emotions including anger, frustration, sadness and loneliness.

The most recent curveball was the end of a five-year relationship. I was making plans for a future, and apparently, he was not. Many of my friends, who were as shocked as I was, commented on how strong I was for how I dealt with everything. I felt anything but. I felt crushed and broken, the future I thought I was going to have was no more.

I pep talked my way out of bed every morning. I felt like my feet were dragging each and every day.  For a while, I stopped eating because the thought of food made me sick to my stomach. I lost a ton of weight (at least two dress sizes), and for the first time in my life I wasn’t happy about it (although even I can admit I looked fantastic). I now know what full blown anxiety feels like. Anxiety attacks became something my body was bracing for when the next one would hit. I cherished the five second reprieve I got when I first woke up in the morning and my brain had forgotten everything that was going on.

I stopped running. Initially, for good reason, I had a bad ankle sprain that wouldn’t go away. But then I visited a podiatrist, started physical therapy, was given the go ahead to start running again…and still didn’t run for five months. Since I started running that may be the longest break from physical activity that I’ve had. I don’t even know how many people told me “You NEED to exercise, it will make you feel better!” Hell, I was telling myself that. But saying that, and knowing that, is a lot easier than actually putting on my running clothes, lacing up my running shoes and going out for a run.

I threw myself into social activities, which as an introvert was draining and exhausting, but that was the point. I was too exhausted at the end of each day to deal with all the emotions swirling in my head. I dove head first back into dating, making profiles on dating apps, swiping left far more than I was swiping right. I met someone fast. Someone great. He was nice, funny, cute. We had SO MUCH in common…and I couldn’t open up. I was honest with him, I ended it, he was great about it (which made ending it that much harder). I deleted all my dating app profiles and exited the dating pool as quickly as I had entered it.

I have made some major changes to my life, and changes are still happening. It’s possible some of them were rushed, but, overall, it has been for the best. The anxiety attacks have stopped (thank goodness!) and I have finally started running again. So far it’s been about one month, I’m training for the Sole of the City 10k on April 14. Saturday I had my first 5 mile run since October. It was slow, my legs hated me, and it felt fantastic.  In the past few months I have learned so much about myself. Who I was when I entered my relationship five years ago, is not at all who I am now, in most ways for the better. My strength and resiliency throughout this whole process has shocked me. It’s taken time, and so much patience to get the point where I am finally, truly, excited to see what the future has in store for me.